How to read a Byzantine Church

Reading a church can be a daunting prospect. Weird Latinate or Greek-based terms are deployed to outline liturgical functions with even odder names in a train-crash of foreign-sounding words.

Still, it’s easier to nod one’s way through references to them – knowing they’ll always be part of the cultural furniture ­– rather than get vexed.

Sadly, these are complacencies the Oikoumene can no longer afford – especially in the West.

So let’s break down the language; the sort of lexicon that makes it seem like we’re taking some dusty inventory.

NB: There are two main types of church: the older basilica (the old St Peter’s at the Vatican is, in many ways, nephew to Maxentius' Basilica in the Roman Forum) and the later (eighth century) cross-in square. Almost all churches we know today are riffs on these two but the architectural features cross over fairly tidily.

Façade: Usually the most ornate part of the church, the façade features a large – sometimes monumental – entrance often decorated with reliefs, pilasters (fake columns), arcades, cornices, mosaics – in other words, any sort of decorational flim-flammery that essentially acts as a visual adhan (islamic call to prayer).

Atrium: The first area people enter in older churches, this is essentially an area for congregating before or after liturgies. They exist because early churches imitated early house churches with their colonnaded courtyards.

Narthex: AKA “vestibule,” the atrium tends to feed directly into the narthex, which symbolises where the world meets the Church proper. Typically, the place where penitents or catechumens (or laity at monasteries) can stand so that they can see and hear the liturgies without participating in them, it’s also known as the trapeza (refectory) by old-school types who remember when tables were set up there for the common meal that followed the divine liturgy.

Manoualia: Large candlesticks that stand either side of the church doors or clustered around icon-stands, they symbolise the pillars of fire that went before the Hebrews in the promised land (Exodus 13:21-22) and are lit as offerings to accompany prayers.

Iconostasia: Icon-stands provide opportunities to venerate. This is done in either a short-form gesture known as the metania, involving a sign of the cross followed by a bend from the waist (with the right hand touching the floor). Or, in elaborate renditions, by making the sign of the cross three times, each cross being followed by, at first, a bow; the second, a kiss; the third, a bow or full prostration (falling to the knees, then touching the head with floor with hands either side) depending on how humble you’re feeling.

Stasidia: There isn’t usually proper seating (as in chairs or pews) in Orthodox churches. Instead, these high-armed chairs tend to line walls and the areas that surround the bishop’s throne. The laity stands during liturgies (only the psalms or homily offer respite), this demand being offset by the freedom to enter or exit at will.

Nave: Wedged between the narthex and the iconostasis (which shields the sanctuary from the laity) is the nave. This is where most of the action happens. Lit by the windows of the clerestory (the high walls above the side aisles), here the faithful gather to worship and the chanters (psaltes) stand to sing. If you’re nervous about when to cross yourself, as a general rule cross whenever you hear the trinity (“Father, Son and Holy Spirit”) invoked. Genuflection isn’t required (NB western rite Orthodox still have a place for it), though prostration (proskynesis) is sometimes desired – usually on the great feasts of the Theotokos. Towards the iconostasis, which surrounds the Holy Doors, there’s usually a dome filled with Christ pantokrator from which hangs the horos or corona (chandelier), adorned with icons as well as candles. Sometimes it is pushed back and forth at the climaxes of the Great Feasts supercharging the liturgy with bouts of joy and verve.

Iconostasis: Usually what you’re staring at as soon as you enter the nave, this was historically known as a templon i.e. a screen, typically made of marble that divided nave from sanctuary. Originally a low and open parapet, by the thirteenth century it had sprouted colonettes and an epistyle from which icons could be hung, taking it from a symbolically liminal feature to a very real wall. If you’ve seen enough of them, you’ll have noticed a pattern. At the top level are the patriarchs; below them, the prophets (with Mary and Christ centre stage presenting the summation of their prophecies); below them, the events of the New Testament; below them, Christ with John the Baptist, Mary, Apostles and Angels praying; below these, the doors, which often have scenes from the Last Supper above them.

Doors: The iconostasis is punctuated by three doors: the central “beautiful”, “royal” or “holy” gate through which only clergy can pass, which symbolises entry to the Kingdom of Heaven, then the two side doors either side for deacons (often named after the icons of archangels Michael and Gabriel that decorate them).

Sanctuary: Home to the altar, table of preparation, chalice, diskos and asterisk (paten and cover), flabella or hagia ripidia (fans), processional cross, candelabra, tabernacle, gospel book (complete with eiliton and antimension), censer etc. The fans are especially beautiful as they tend to bear the likeness of seraphs with their six wings, which they are meant to represent. These sit below the apse, which typically contains an iconographical motif involving the Virgin Mary and Child a “Platytera ton Ouranon” (More Spacious than the Heavens) or a Christ in a traditio legis pose – handing his flock the law of the New Testament. This is flanked by the chapel of Prothesis on the north side, where the offerings are prepared, and the Diaconicon on the south side where vestments are stored.

If you would like to read more about this, the following two books are good to delve a bit deeper: 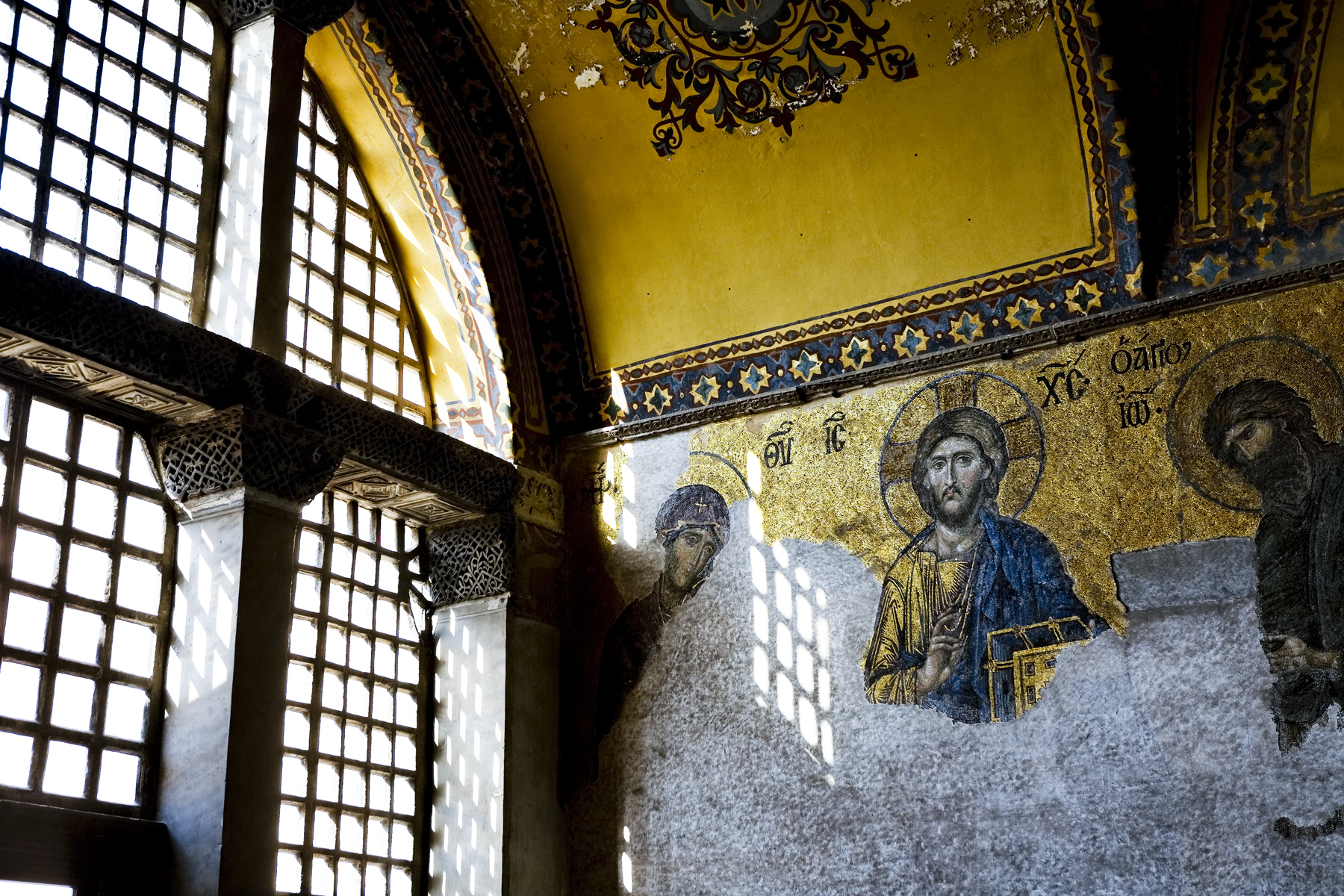 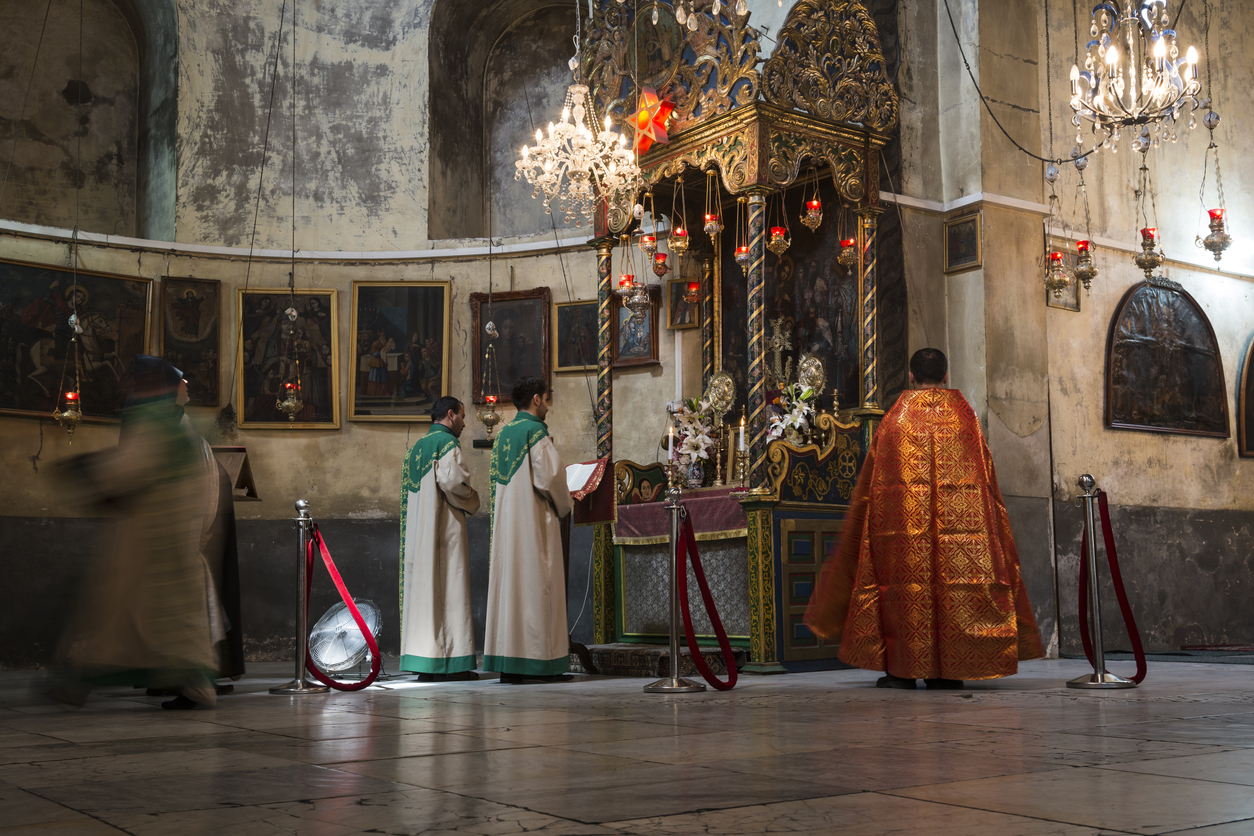